Yesterday I visited the Historical Fort Songadh from Surat which is around 85-90 kilometers on bike and I preferred to visit there on BikeTrip as it was an awesome experience riding a bike from Surat to Songadh. It was totally different from my visit to Dumas beach & Tithal beach, as it’s more like a hill station.

The road was far better than the road it was last year and the Government seems constantly working on it to make Songadh a tourist destination & in the year 2016, Songadh Nagar Palika passed a resolution to develop the area at the cost of 1.51 Crore.

Bike Riding from Surat to Songadh

I and my friend decided to visit the historical fort Songadh from Surat and we started our journey at 7 AM in the morning. 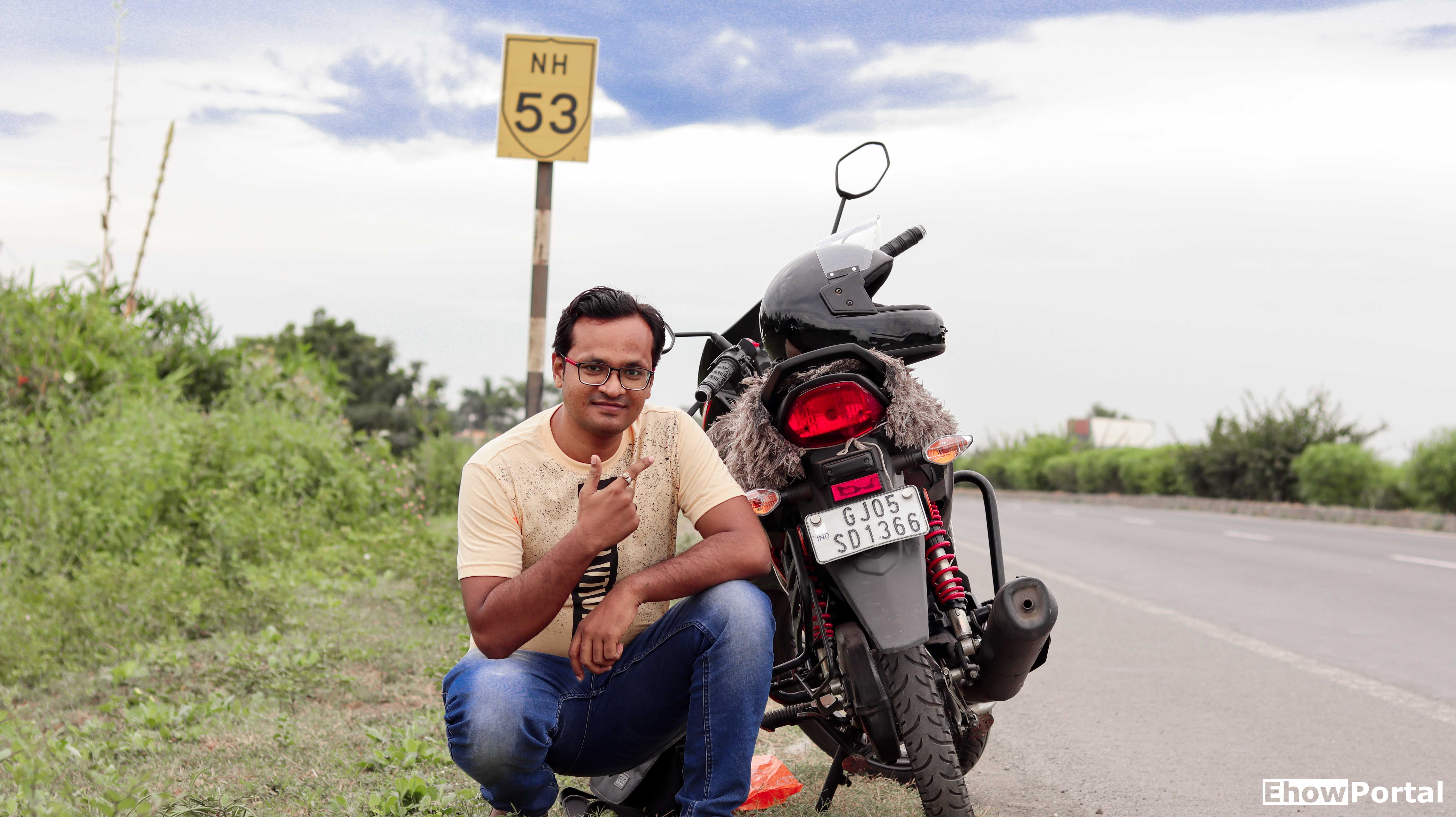 I don’t have a sportbike but I drive a lot as I love it. On 20th October 2019, I have completed around 178-kilometer journey in a single day which I am going to break that record withing new months from now.

We reached at Songadh by around 1 PM as we took a lot of photographs in the middle of our journey & spent a lot of time in tea and coffee break. From next time, I decided to minimize the break time so we can cover more places or go far than this to break my own record.

An atmosphere on the road was very beautiful as even after 10 AM in the morning, we didn’t see the sun and a lot of clouds in the sky. 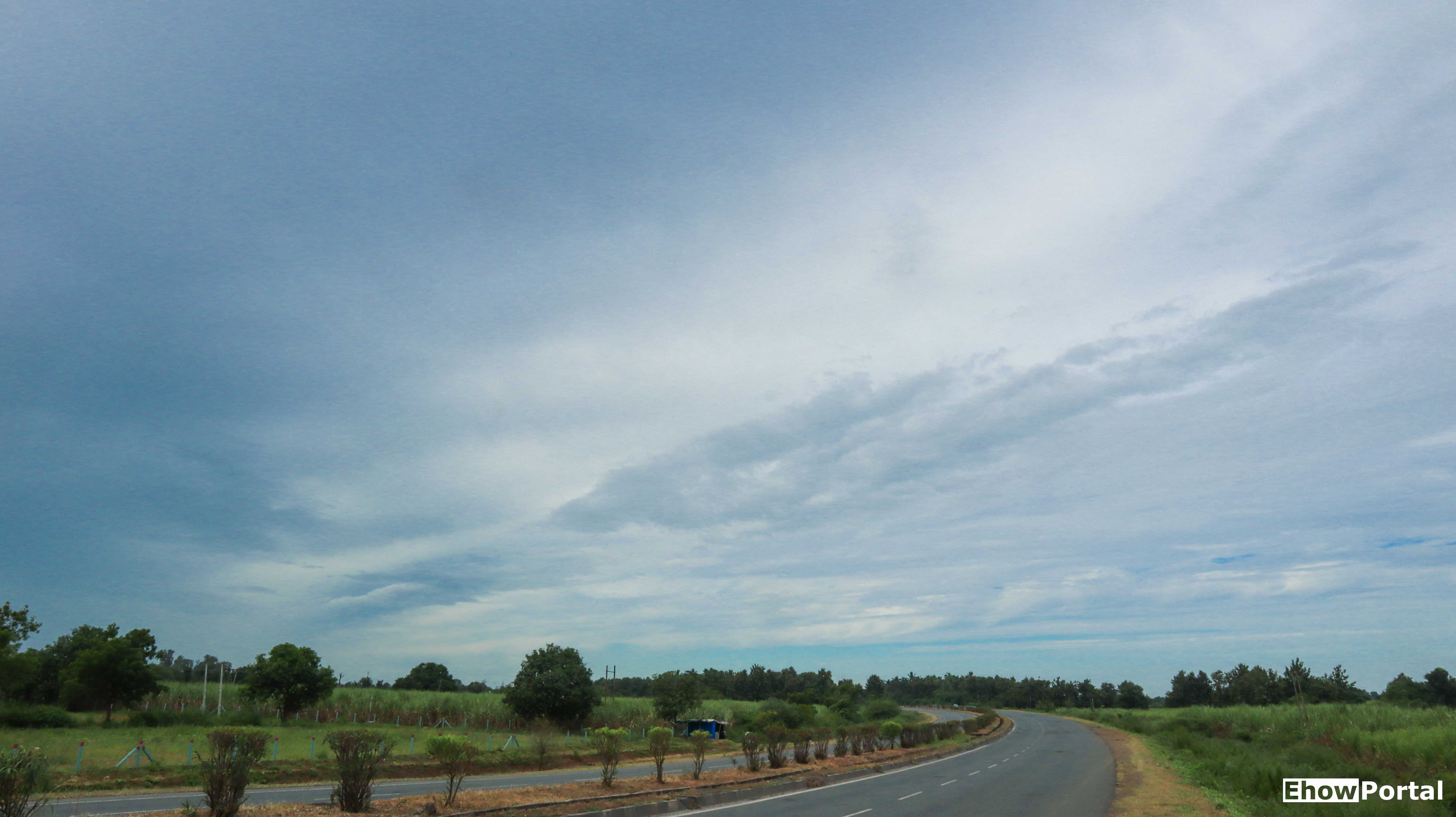 Also, the rain was started when we are about to reach Songadh and it was there an entire day. There were not many vehicles on the road even it was Sunday. The reason is Songadh is a Historical place but very few peoples know about it.

I visited Songadh Fort specially to explore historical places around me & let people know about such places where nobody visits.

Look at the Songadh fort image below, we are only a few kilometers away from our destination and here is how it looks from the distance. 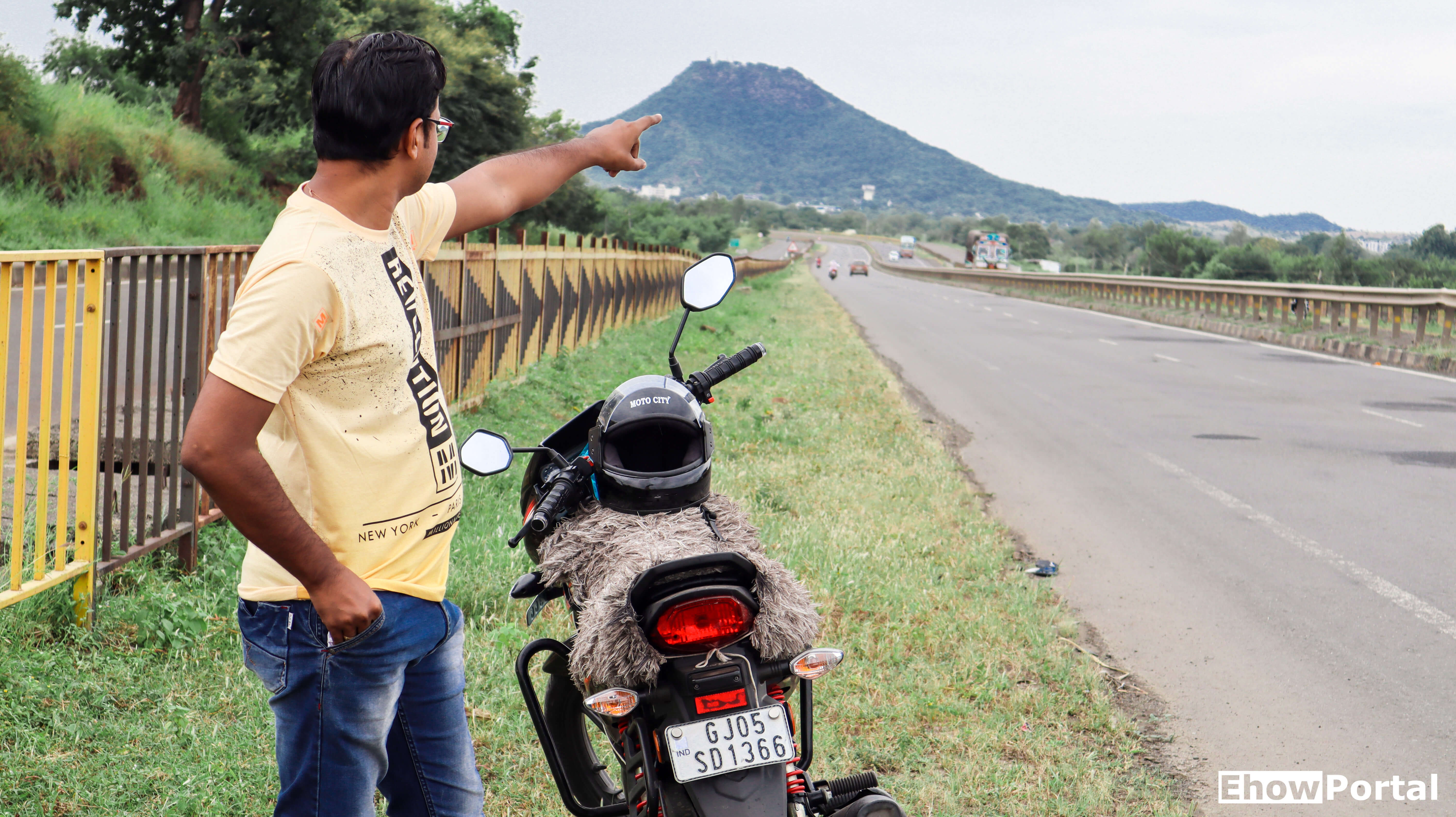 I can’t stop my self capturing this photo on the road, as it was very beautiful looking from that distance and yes, slow rain was also with us. So I parked my bike on the side & my friend helped me to capture this photo. 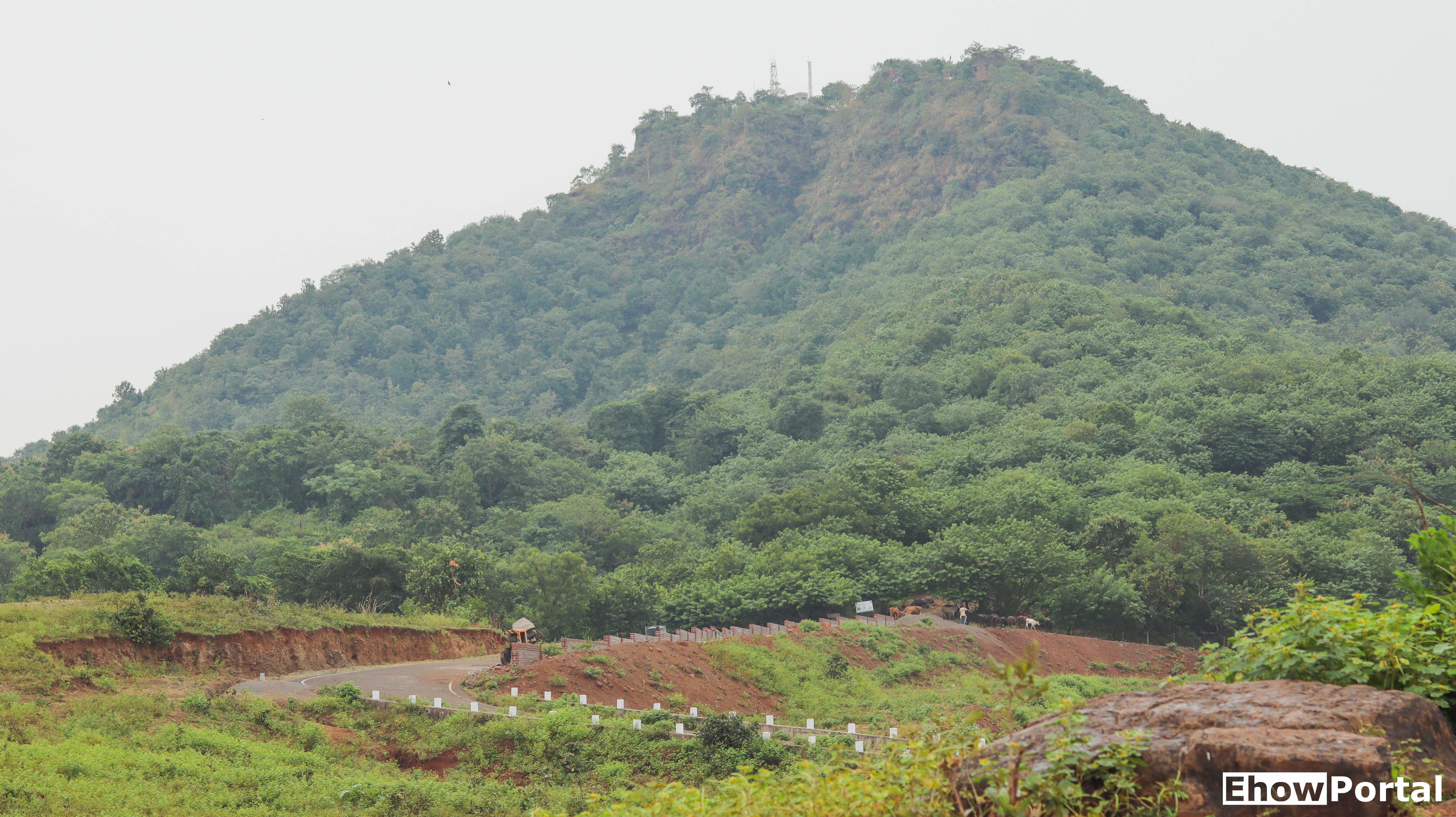 Finally, we reached the bottom of the Songadh fort from where we have to start our journey to the top of the fort which is around 2-3 kilometers to go.

Riding Bike to the Top of the Fort

When we reached the bottom of the fort, there is a railway track that we need to cross & then the road to drive bike is a bit difficult.

We have asked local peoples if we can ride a bike to the top of that fort or we have to go on the top by walking there. They suggested the road is good to go on the bike and we can easily ride a bike & also I saw few peoples riding on the triple seat so we decided to climb to the fort riding our bike.

Since the weather was raining, the road was sticky and wet & it became slippery. We were two peoples and the bike was also quite heavy so we could not manage to take it to the top. Instead, we prefer to park the bike in a safe place and went to the top of the Songadh fort by walking there.

Don’t drive any mountain or hills during the rainy season or when you feel the road is slippery, there is a change of falling from there if the vehicle is heavy. It is always better to go by walking in such a situation.

Road From the Bottom to the Top of the Fort

As I mentioned earlier, the Songadh fort was not much popular so very fewer peoples were there. We were two peoples and the dark forest trees and the sounds of other insects soundings like it’s a haunted place but it’s not actually.

We felt some wild animals might be there as there is nobody around us, we only 2 peoples there walking down on the snake-shaped road & enjoying an adventurous journey.

Sometimes the shape curve and U-turn road were very dangerous and we thank ourselves that we parked bike somewhere at a safe place and climbing to the top by walking was quite easier than driving a bike there on that dangerous road.

So whoever drives bike there, has to park their bike and from there, they have to go by walking on those steps pathway. 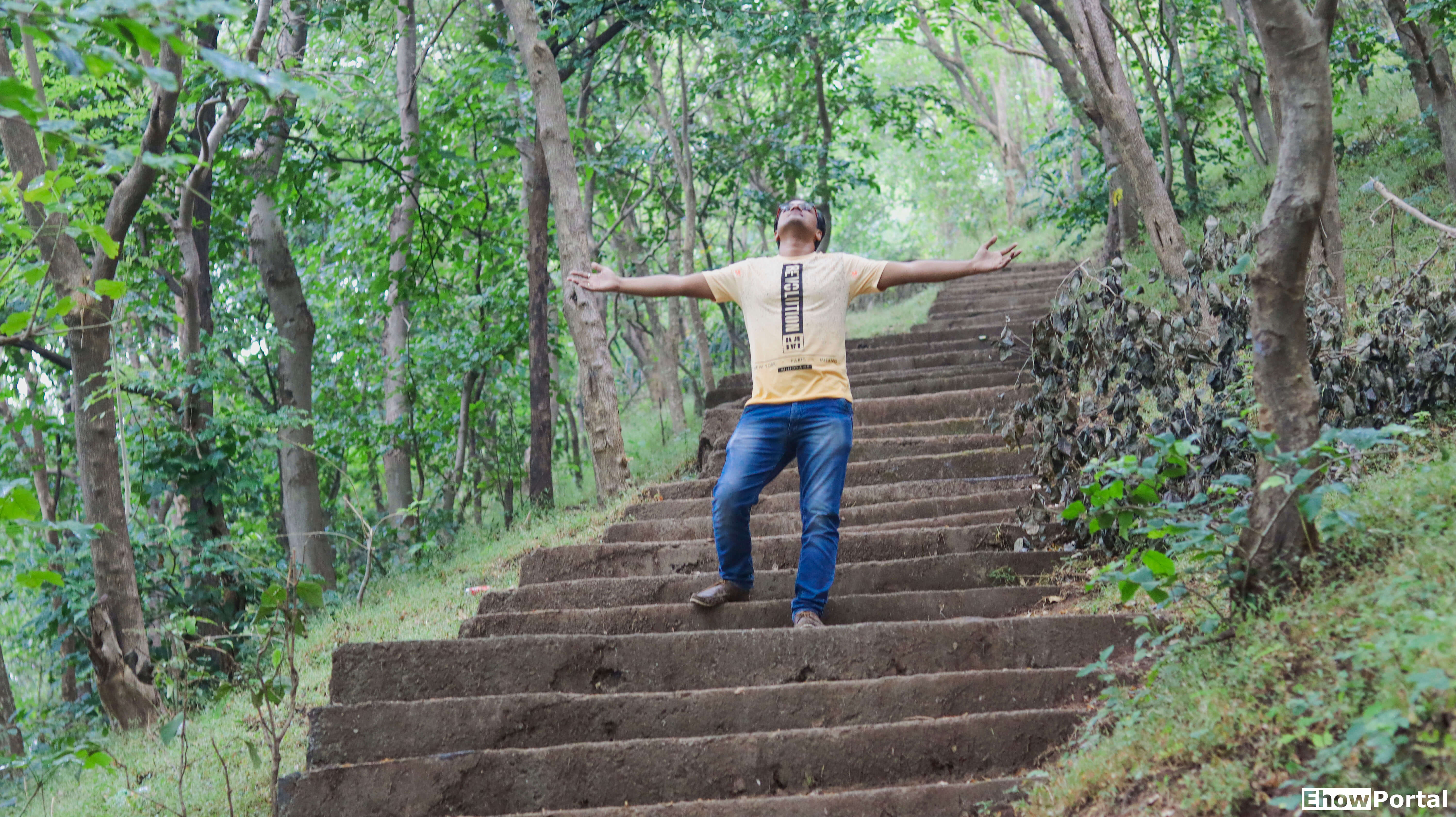 On the gate, there is a big golden symbol of a lion head on the main entrance gate of Fort Songadh & the side walls made up of old brick walls sound like the very old place who is taken care of by none. 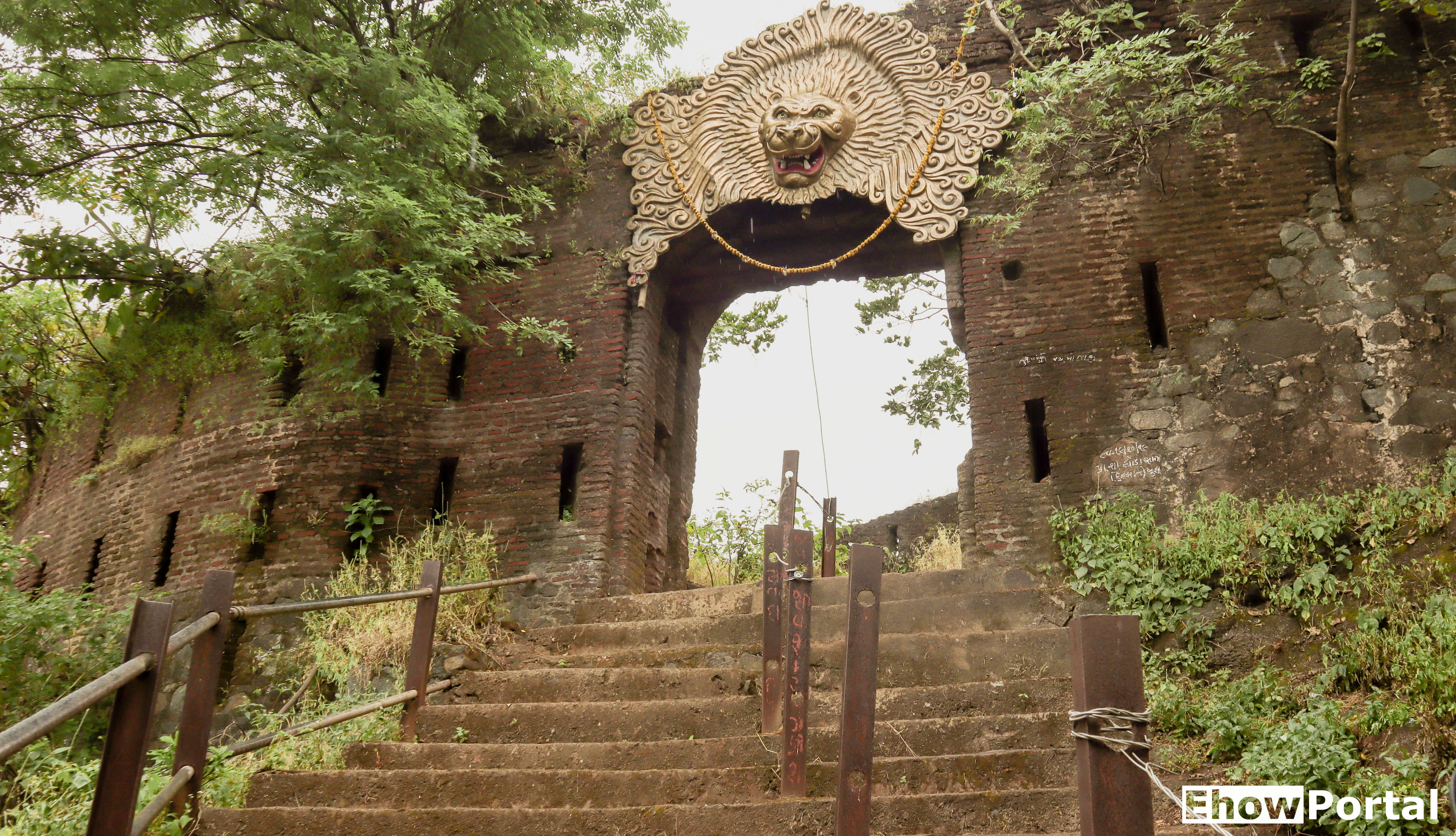 When we have entered into entry gate of Songadh fort at the top, there are hardly 4-7 peoples came there to watch and enjoy the height of that hill like a fort. Unwanted grass came out of everywhere because of the recently gone rainy monsoon season.

Above is the closer look of the gate from an inside view. After entering the gate, there is another step pathway to reach the main gate of the Songadh fort. 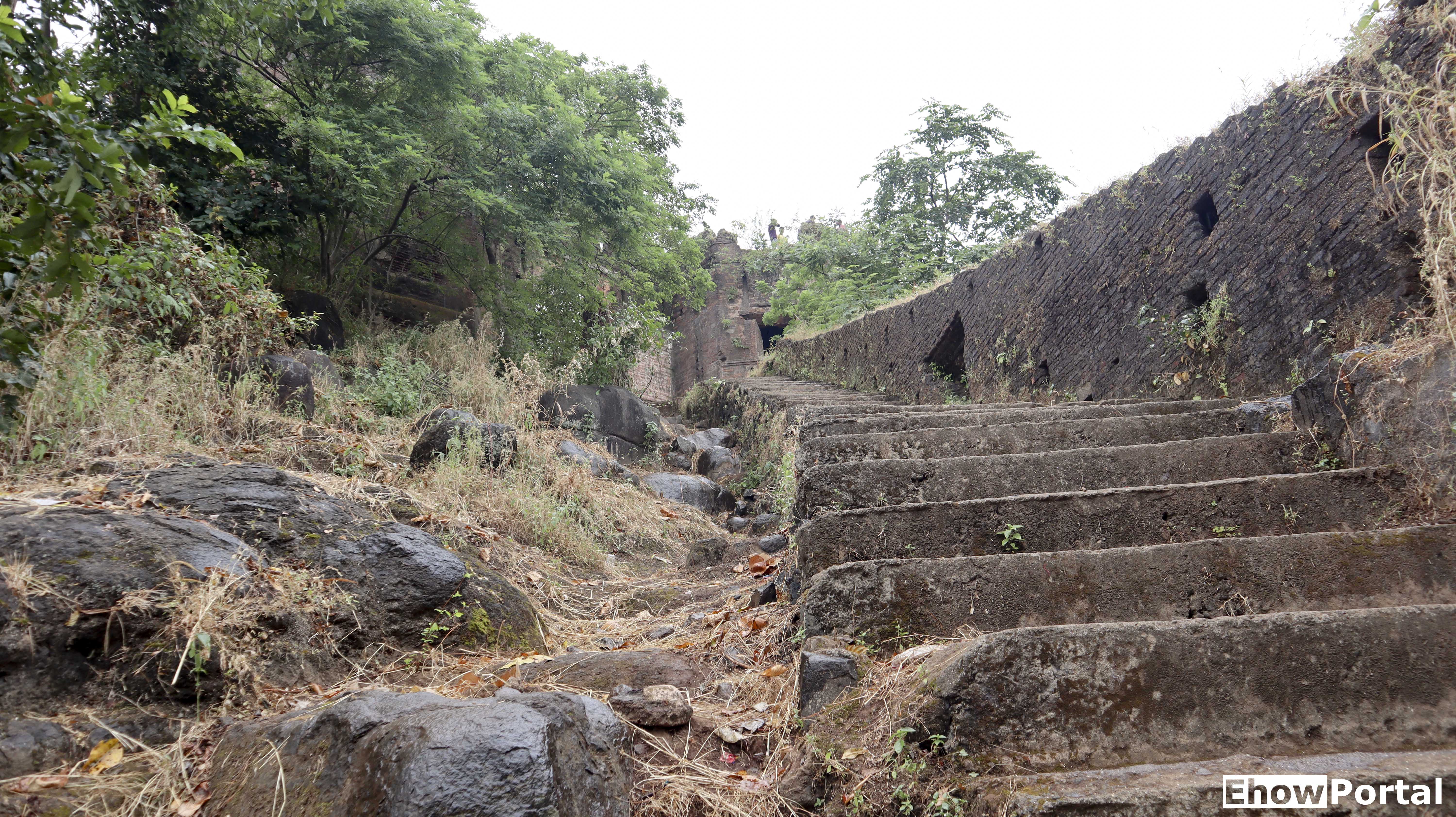 Above is the photo of this ancient heritage pathway to reach to the second entrance gate of the Songadh fort. You can also enjoy the view of the bottom from some of the places of those steps. 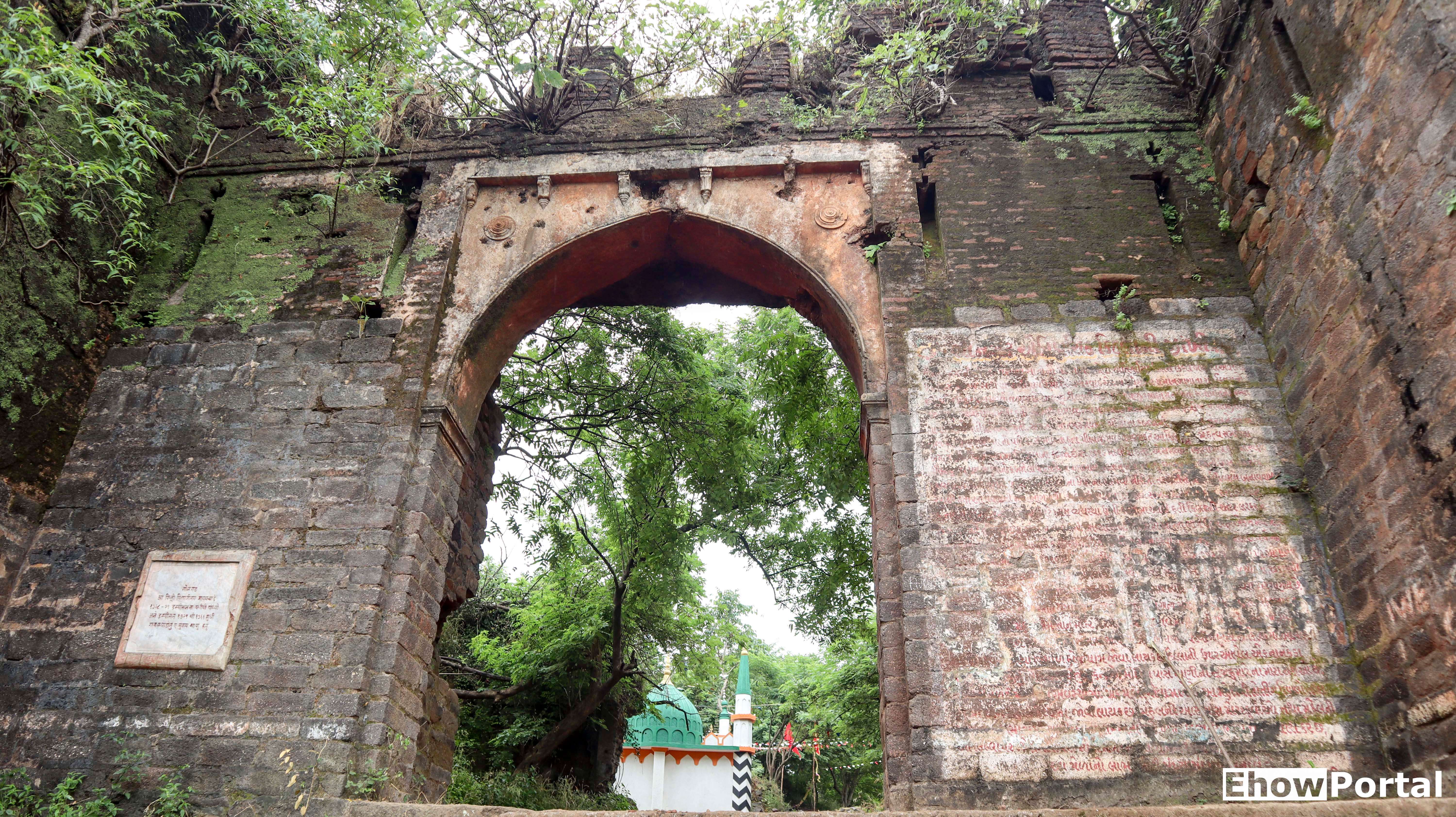 On the second entrance gate, you will see a signboard on the wall written for the visitors to understand when exactly the fort was built and who was living there. 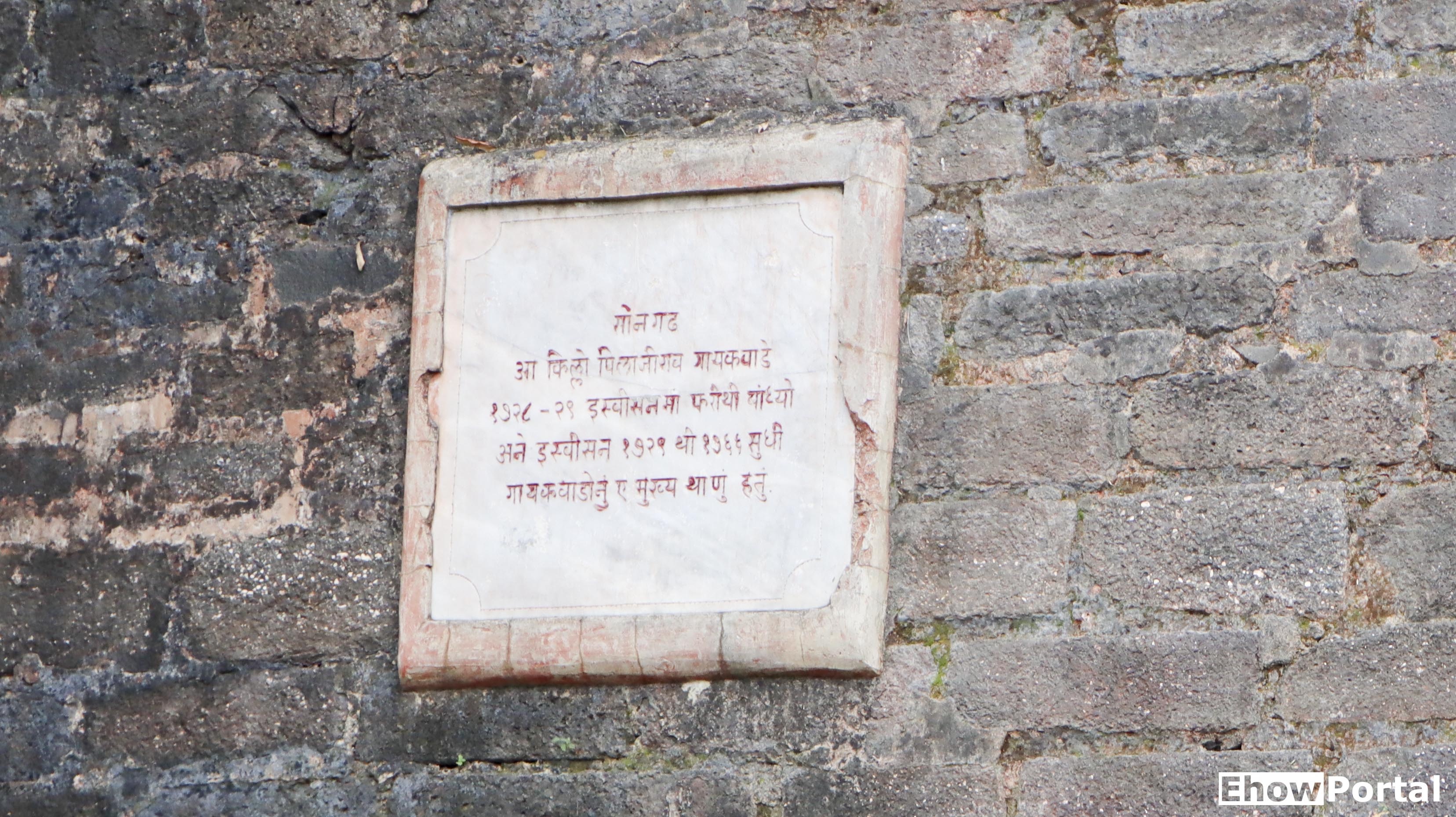 The main reason to build this fort at the high of the hill is to keep an eye on enemies coming towards them. 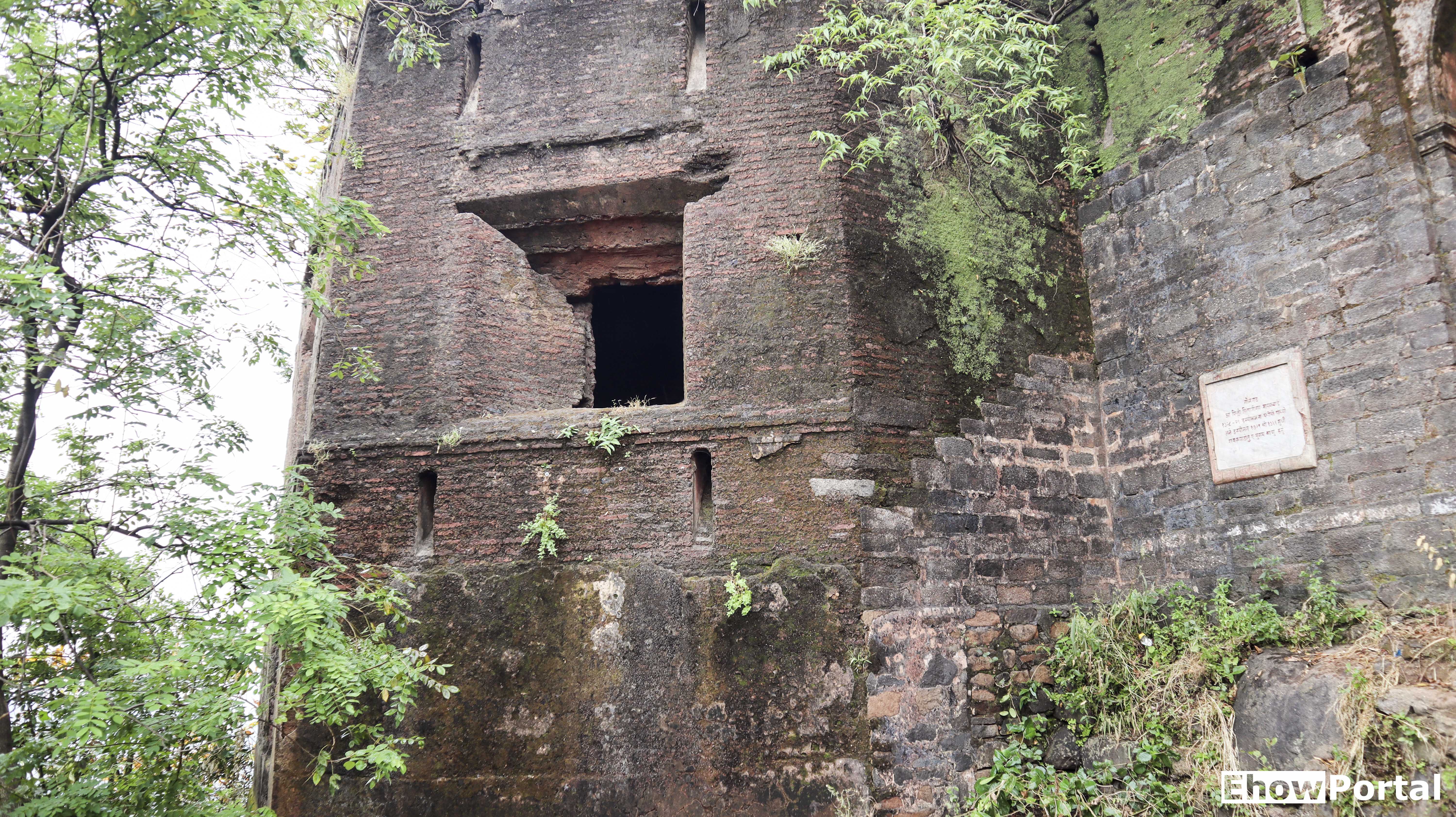 Once you enter from that gate, you will see there are two sides of the gate covered room like structure that has the terrace along with windows from where you can enjoy watching the entire Songadh place. It was probably built on the height to keep watch on the enemies I think.

The place is actually beautiful, the government has already advised people not to throw their plastic waste there to keep the place clean but still, peoples arriving there is spoiling that heritage place with their plastic water bottles, food packets like things.

After you came out of both sides of the room/cave-like structure, you see a dargah on the side and just walking a bit more, there is a little temple of Shri Mahakali Mataji. 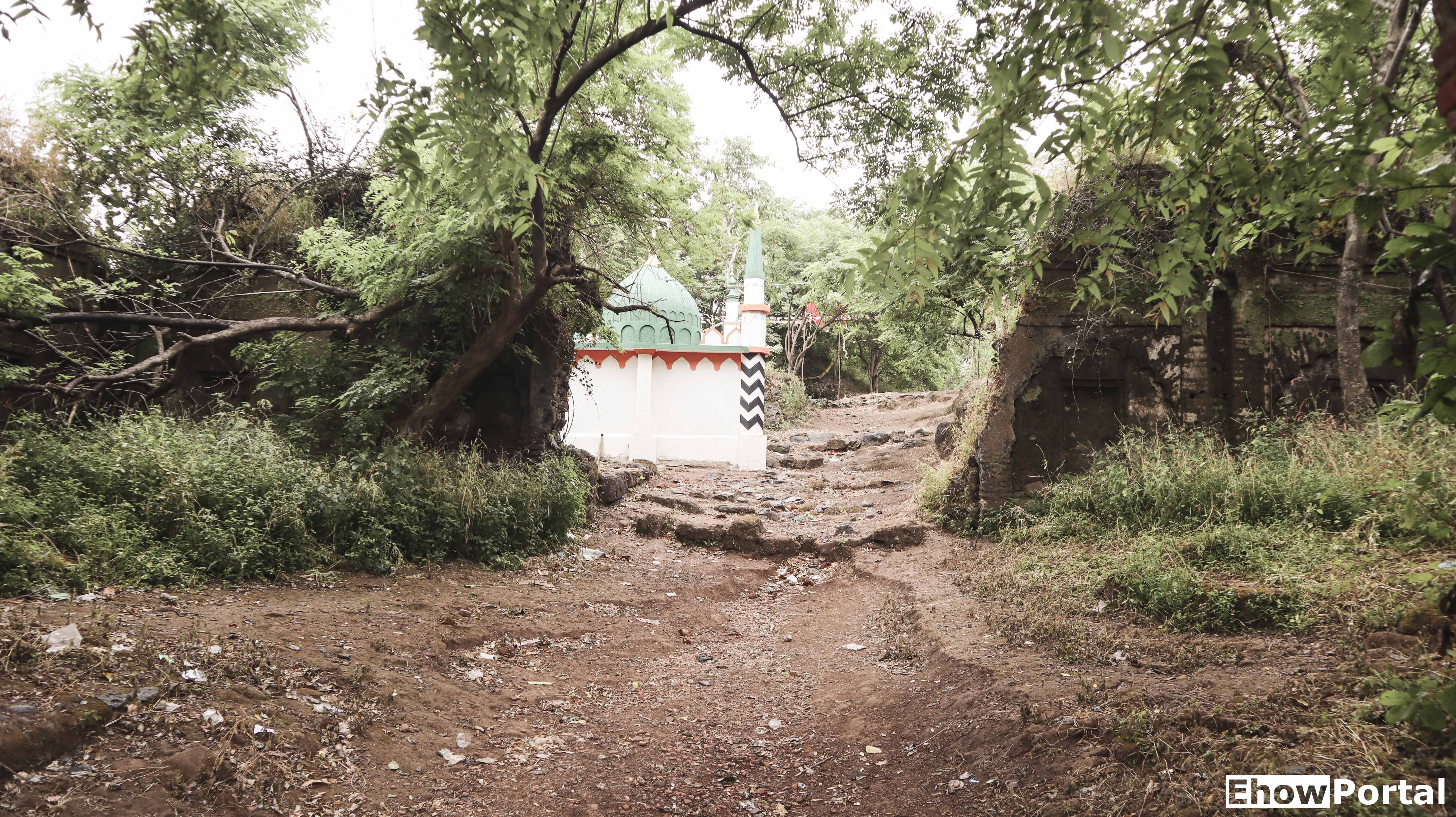 We have seen evidence of the influence of both Mughals, Marathas & Hindus on this fort as we have found Hindu goddess temple, a Muslim dargah and it was built by Pillaji Rao Gaekwad according to the history.

There is sideway using which you can climb on the terrace of those rooms that I have said above, which is the top place of that hill Songadh.

The pathway to reach on the top is a bit narrowed but the beautiful scene you watch from the top of that fort is incredible. You feel like you are on a hill station watching the horizon with clouds coming to you.

From the top view of the Songadh fort, when you look a the bottom, you feel like you are watching it from the plane. If you want a more adventurous trip, climb the Girnar and see the difference your self. 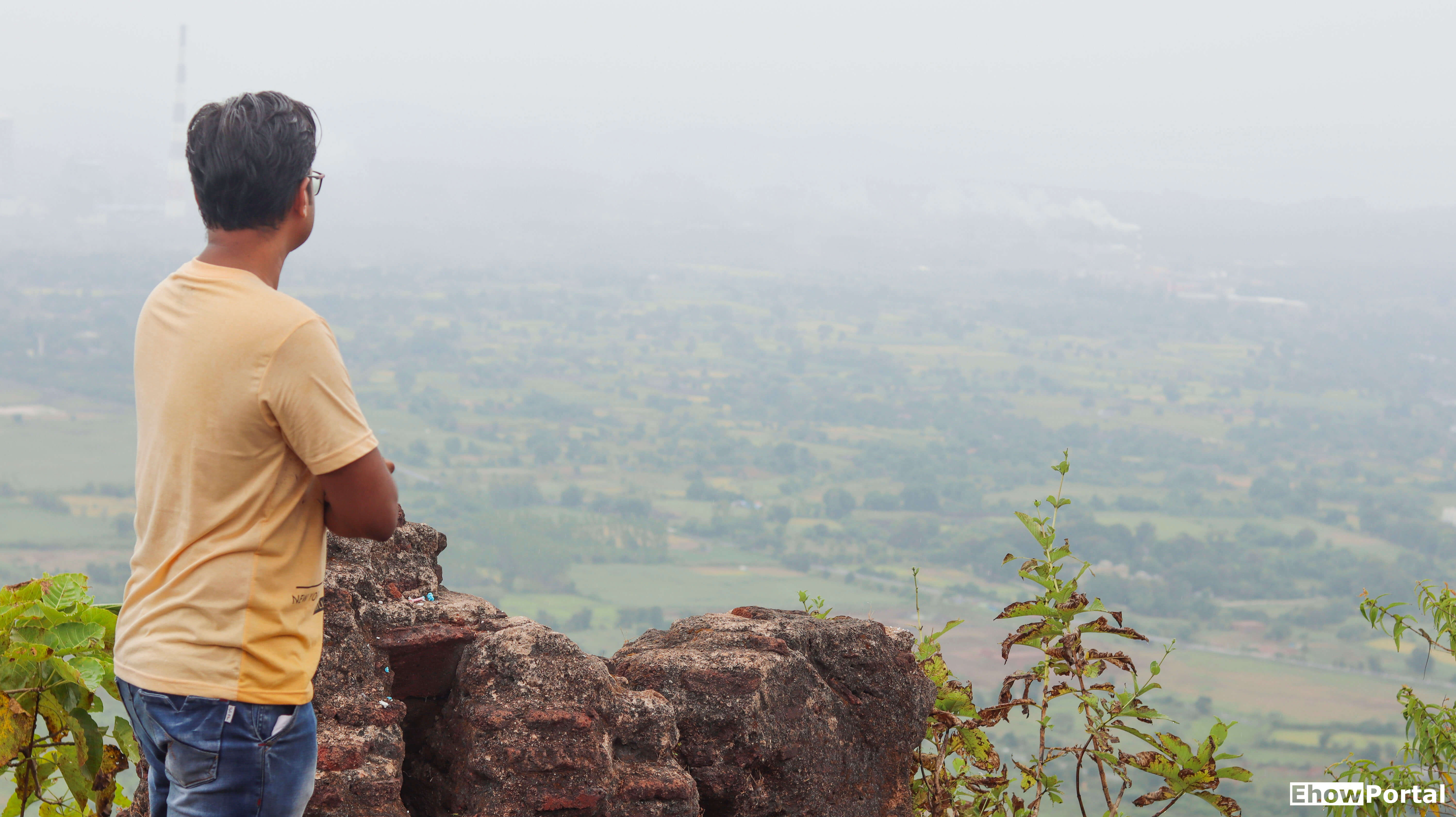 There is still rain & it was difficult for us to capture photos of that moment because we didn’t bring a plastic cover for the electronic gadgets that we have. We still tried hard to capture the beauty of nature & the heritage fort that we were at.

We sit there on the top for an hour and enjoyed the silence, natural sounds, rain, clouds & much more there.

Way to the Home

Now it’s time to leave the place, as we haven’t had any food with us since morning and both were hungry since morning & it was around 4 PM. We packed things up and left the fort walking down the pathway. We reached quite faster by walking down as we were only 2 peoples left and everyone else from there has left quite ago.

We reached the place where we have parked our bike, cleaned its tyres as driving through the mud, it was stuck on the tyres line which might make the tyre more slippery and we could even fall from there on the bike.

Now we clean the bike tyres using the sharp-edged stone and drive the bike to the bottom, but seriously it was quite a sticky road because of the rain since morning. We decided to get off the bike and walk on the road without riding a bike. But it was quite slippery and we couldn’t even manage to take a bike with us.

For a few minutes, we thought we should leave the bike there and reach the bottom by walking but later we made our mind to take a bike with us for anything. We somehow managed to reach to the bottom and it took almost 2 hours to reach the bottom with the bike as the fear falling bike was more than the adventure we enjoyed.

Finally, we reached the bottom where we could take a deep breath and started our journey to our home.

We have taken a tea break on the road at Songadh and discussed the things about ghost stories and a horror story with the stall owner and he said after 5-6 PM, there is nobody on the top of the fort and everyone leaving before that. According to him, there are some horrific sounds and screaming voices out there at the night on the fort, so it looks like a lonely and horrific place at the night.

It may be right or wrong or some belief, we left the place as we have to drive a bike to the long distance to reach our home and we didn’t have much energy and totally tired.

Never take the bike on the hill station or mountain in the monsoon or rainy season if you are driving there for the first time. This is the biggest lesson I have learned on this road trip. Exploring this historical place & writing about this fort is my honor. I will keep exploring unvisited places for you on our upcoming blog post.

We missed some essential things to pack on this trip & we have noted down everything at our end so that we don’t miss it in the future. Want to know which things are essential to pack on a road trip? Enter your email address below to receive the complete list.

What lesson you have learned from your last bike trip? Share your thoughts in the comments below.