All android application has no close button or no exit buttons. Advanced Task Killer application runs in background on your android & can effectively clean your unused tasks on your system. 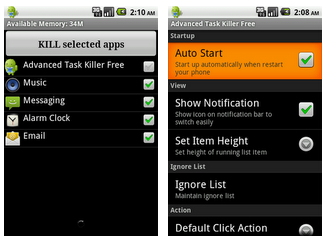 You can set it as autostart, so when you are restart your android, it will automatically starts.The main advantage of this app is that it shows all running tasks on your system and lets you to easily kill them.All you need to do is just tick mark the apps which you wish to kill and hit the kill selected apps.At the top of application, you can see the available memory in MB, when you tap the kill selected apps, your available memory size will be increased. That is just because the running apps are consuming system memory as well as battery consumption.Thus, Android task killers improve your phone’s performance while also boosting android battery life.

Advanced Task Killer pro version has more feature than this version, it costs only 249.23 INR(around $5 USD).On Pro version, you can see check option just at the side of kill selected apps button. It is ad free version.It allow you to check battery usage summery with details on your android phone.However both version has quite similarity.Autokill level allow you to choose the apps killing behaviour says disable, safe, aggressive, crazy etc.Depending on your need, you can set the apps killing behaviour on your android.

Crazy: All apps except for apps you are using with.

There is interesting option in that apps, that is ignore lists.Ignore list is for you to ignore some applications you don’t want to kill. If you long press on the application listed on the main screen of Advanced Task Killer(ATK), the menu will pop up, then you can select ‘Ignore’, the application would be moved to ignore list. When you tap ‘Kill selected apps’, it won’t be killed any more.

You can download the Advanced Task Killer app @ Google Play